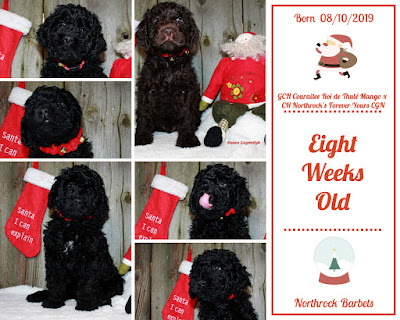 Such a busy week the pups have had as they finish up their eighth week. For the first time in their young lives they are acting like real "dogs" albeit little ones but, dogs none the less. Personalities are shining through in the puppy pen and it's getting easier to recognize the barks and play sounds of the individual puppies from another room.

The beginning of the week definitely had great weather allowing for plenty of puppy play out in their outdoor puppy pen.  Some cold early morning romps put a glow on those little cheeks. Four to six times daily for thirty minute stretches at a time.  Their conformation has been studied twice and their temperament test was completed on Saturday. What an amazing litter, they are all so close in every aspect. 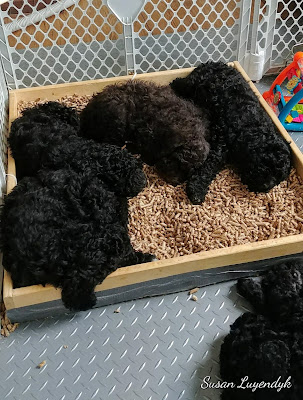 The potty box is a favourite place to nap LOL

We stepped up the potty training yet again.  After their late night meal, we put the pups out with their mom for their last evening potty break.  This is working very well.  No playtime allowed at this potty break.  The only good thing about it being so cold at 10:00 pm is the ease of getting pups back inside quickly.  Brrrrr, too cold to be out. 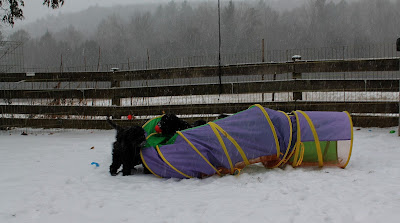 The pups finished this week with the best play time ever after we received a snowfall that started midday Sunday and stopped Monday afternoon.  The pups were so delighted to be chasing each other and chasing these funny things falling from the sky.  They came in from that morning's romp, wet, weary and completely satisfied.  They were smiling as they settled for their morning nap. 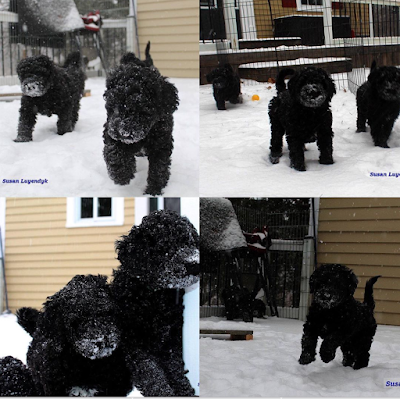 The pups are busy putting the finishing touches on themselves in preparation for their departure to their forever homes in the next week.  Just a few more appointments and they will be ready....where has the time gone????

Until the next update,