Such a busy and eventful week we just finished here in the puppy pen. The pups settled into their new digs immediately last Saturday and were right at home in no time at all. By Tuesday they were out of their whelping box and their space had been slightly increased. 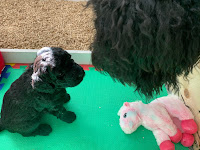 Pee pads were exchanged for litter boxes staying in the exact location as their pee pads. Rib bones for 10 minutes a day were introduced on Monday to prepare them to start using their jaws in advance of the introduction of solid food later in the week. 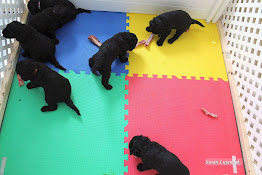 I must say, the bones went over very well! Pups had their first solid meal late day on Wednesday and as usual they were quite up for their newest challenge. I am very pleased to report those pups ate with gusto, nothing left in those bowls! 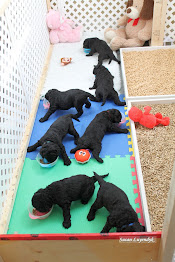 How delighted the pups were when they met some puppy people from 2 of their family homes this week. Their first and earlier visit had some charming, sleepy and mellow babies in the arms of their admirers. 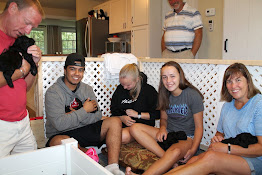 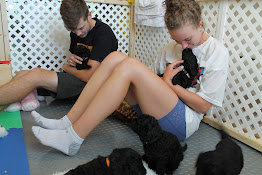 charming selves, especially Mr. Von Zipper as he ripped around the puppy pen doing his best impression of being a “big boy.” Talk about zoomies!! 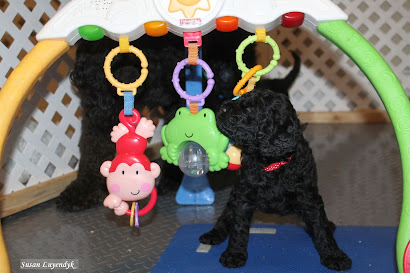 Their 4th week ended with introductions to hard interactive toys the morning of their 28th day, a switch from all their soft stuffies. 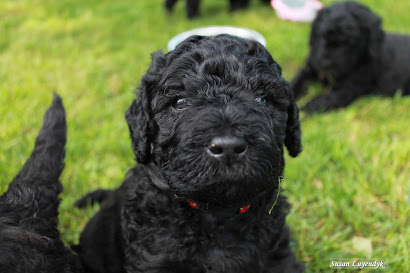 And best of all their outside playground was finished and ready for their first adventure. What a fun time they had even if it was only a mere 15 minutes. They were pretty sleepy puppies after that excursion.

And so ends their 4th week and as they greet their 5th week there are many more new adventures on their agenda.

These puppies all have special homes waiting for them. If you would like to follow the litter's progress please join us on Facebook and like our Northrock Barbets page to see frequent updates and photos.

Posted by Northrock at 4:10 PM