Camping with a canine companion.....

We have just returned from a camping trip with friends at Bon Echo Provincial Park. http://www.ontarioparks.com/ENGLISH/bone.html  We had a super time.  We have never camped with a dog before but decided to bring Sophie along to see how it would work out.  It was fantastic.  She was really really good.  We went for long walks and they have a designated dog beach and off leash area which is very nice.  Shallow sandy water and lots of room for dogs and kids to swim :0)  We didn't end up taking too many photos but here are a few to sort of give you an idea. 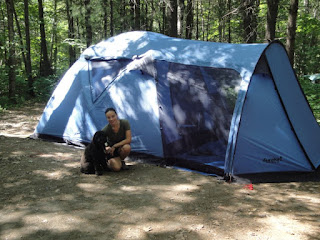 Definately room for a family of four and a dog....or two or three or heck I'm sure you could fit at least four extra dogs in this tent - it's huge!!!! 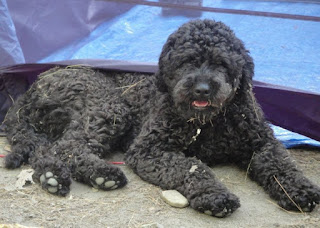 No they don't really shed but ummm it's almost the reverse effect.  Instead of leaving hair all over the place they collect all manner of debris in their coat.  Nice :0)  After a few shakes it does mostly drop out but I still have to give her a good brush out...There is a fair amout of sand still in there! 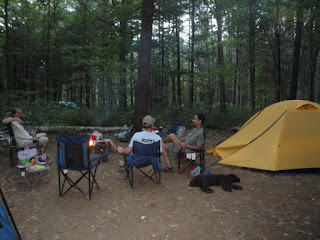 She sure slept well at night.  Three families and 6 kids all under the age of 7 makes for lots of fun and excitement but by the end of the day, just like the children, she was exhausted.  Gives new meaning to the expression "dog tired".
Posted by Northrock at 12:20 PM No comments: 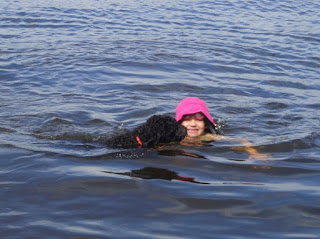 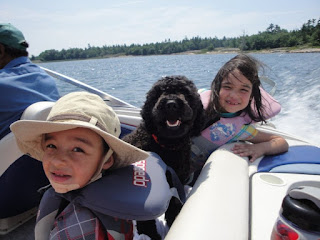 Spent the weekend up north at the cottage on Georgian Bay.  Great weather all weekend and everyone had fun swimming and boating.
Posted by Northrock at 2:59 PM No comments: 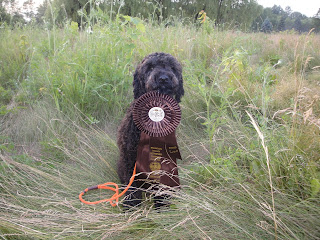 I am very happy to brag that Sophie earned her WC last night at the Mountain Valley Retriever Training Club test in Flamborough, Ontario. Sophie was the only Barbet running and I was so pleased that she did so well. A lot of people were curious about her as it was the first time many of them had seen a Barbet let alone watched one run. She did a great job and brought back all the birds!
I have a lot of gratitude for all the people who have helped us to get this title.  Susie Bell is a great trainer and she really got us off to a great start.  A huge thank you to Sue Kish for everything she did to bring out the best in Sophie and get her ready to run.  Sue you are an amazing trainer!  There is no way we could have achieved so much so soon with out you.  And of course to everyone who threw birds and bumpers, quacked duck calls and fired off starter pistols - thank you too!

Thanks again to Florence Erwin (Sophie's breeder) for providing me with such a wonderful girl. Sophie is now the 1st Barbet in Ontario to earn a WC, the 2nd Barbet in Canada, the youngest so far and the 1st Canadian bred Barbet to add the letters WC after her name! Yippeeeeeeee! 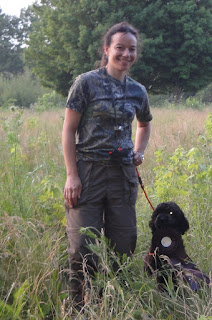 Posted by Northrock at 7:38 PM No comments: