Sophie is doing great throughout this pregnancy.  She’s such a sweetheart, always wanting pets and cuddles.  It’s not too much longer until her puppies with Winston are due and she is definitely looking pregnant.

Here is a photo of her taken on our walk today. 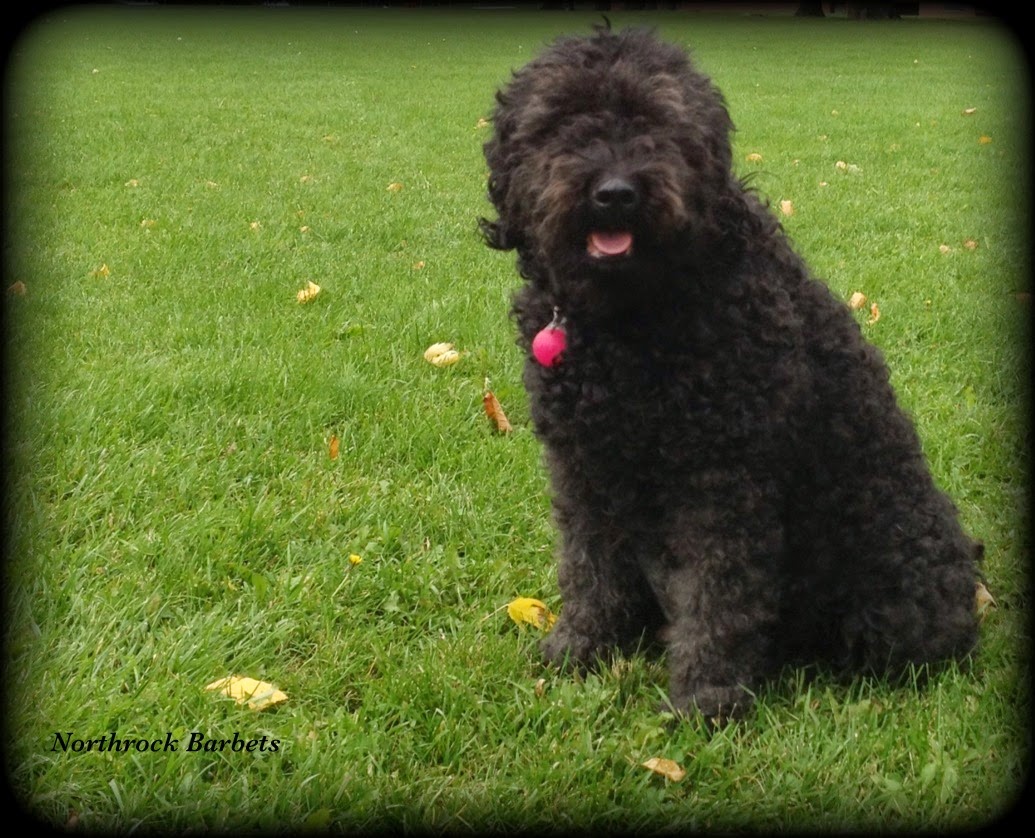 We are able to feel the puppies moving and if you look close enough you can even see little ripples in her abdomen as they move about in the womb. We are able listen to the rapid tic, tic, tic of their little heartbeats with the stethoscope.  The miracle of new life growing never ceases to amaze me.  We are very much looking forward to meeting these special pups.

For those who are interested in seeing how puppies develop check out this poster developed by Matt Beswick http://barksandwoofs.blogspot.ca/p/embryonic-puppy-and-dog-development.html

More information about this exciting breeding can be found on our website http://northrockbarbets.com/litters.html
We anticipate that these pups will have many of the wonderful qualities their parents possess.  If you are interested in a puppy for show, performance or as a loving companion contact  Stephanie at northrockbarbets@gmail.com

Posted by Northrock at 4:49 PM No comments:

I am back home again after spending the weekend in London, Ontario attending the 2014 Purina National™ dog show which was hosted by the Elgin County Kennel Club.  Club Barbet Canada (The National Club for the Barbet) had a breed booth in the Breeders’ Village all weekend long and that’s where I was stationed.  The Purina National is a large, prestigious dog show that attracts many exhibitors and offers over $40,000.00 in prize money.  This show took place in conjunction with the 2nd Annual London Pet Show and attracted a lot of visitors.

I like to keep my dogs at home when one of them is pregnant or if there are puppies on the ground.  With Sophie’s puppies due at the beginning of November, Brian and JoAnne were kind enough to let me borrow their Barbet Josie for the weekend.  I had a great time hanging out with “Josie the Wonder-Dog” as her family affectionately calls her.  Josie is such a sweet Barbet and she did a great job all weekend long meeting and greeting with the public.  She was a wonderful ambassador for the breed.

Throughout the entire weekend a large number of visitors who had never heard of the Barbet before stopped by to say hello and to get to know the breed. Myself along with the other club members who volunteered in the booth handed out close to 150 brochures during the weekend long event.  It was a great weekend of breed promotion and education and I look forward to doing it again in the future.
Posted by Northrock at 7:22 PM No comments:

Sophie has been bred to Winston and puppies are expected at the beginning of November 2014!

At the beginning of September my daughter Olivia and I drove to Quebec to breed Sophie to Winston.  We had a wonderful time and enjoyed visiting with Isabelle Auger, Derek Duguay and their boys and Denyse Rousseau.  Winston is a lovely Barbet and we are very excited about this litter.  More information can be found on our website.

Isabelle and Derek live near Old Quebec City.  Olivia, Sophie and I were able to take some time to explore the city while we were there.  Here are some photos from our visit.

Sophie is doing very well.  Her pregnancy was confirmed by palpation towards the end of September.  She getting a little bigger now and her svelte little tuck up has disappeared. Sophie is in great shape and we are enjoying the beautiful fall weather we have been having by going on lots of walks together.  We are so looking forward to the Winston x Sophie litter and we are very grateful to Isabelle, Derek and Denyse for letting us use their beautiful boy.

We anticipate that these pups will have many of the wonderful qualities their parents possess, especially their outstanding temperaments.  If you are interested in a puppy for show, performance or as a loving companion contact  Stephanie at northrockbarbets@gmail.com

Posted by Northrock at 3:59 PM No comments: