This past weekend I attended the Windsor All Breed Training & Tracking club dog shows and I'm very pleased to share the news that our lovely girl Summer went Best of Breed to finish her conformation championship under judge Mr. Edward Wild.  Summer was bred by Anne Plomp and Miska Aksular and is out of Nuphar's All My Tomorrows by Eddie Bo Da Capo.  We are so happy to have her as a member of our family.
Our homebred girl Gracie from our Billy and Lexi litter (Dutch CH Nuphar's Everything Zen x BPIS CH Northrock's Eureka CGN) also finished her championship on the weekend. Thank you to judge Sue-Ellyn Rempel for appreciating our puppy.  Gracie turned ten months old on the 23rd and I'm very pleased with the promise she is showing. Earlier in the month at the Scarborough Kennel Club she earned her Canine Good Neighbour temperament title which was also really nice.  She has such a fun and friendly personality and I look forward to watching her mature. 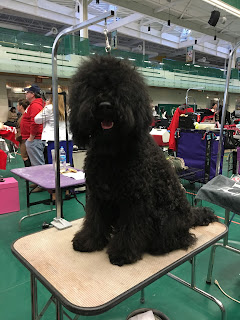 Gracie's littermate Jax (Northrock's Good Vibrations) has also made a foray into the ring and shown by his new friend and handler Peter Scott he has picked up some points towards his championship.

It's been fun going to dog shows and presenting my Barbets.  There is always something to learn, new friends to make, old friends to visit with and the dogs enjoy the attention and treats.
I am pleased to share that Hadfield (co-owned with Marisa Victor) a most agreeable and friendly Barbet also had a fun weekend out showing at the OBA show.  His charming and adept junior handler Alberta won her class with him on the Saturday.
Posted by Northrock at 11:42 AM No comments: