Lots has been happening with the Boomer and Ellie puppies during the last couple of weeks.  We've watched them grow from neonates into little puppies that are quick and co-ordinated.  They can see and hear and are making all sorts of vocalizations from little puppy growls to yips and woofs.

They made the big move out of the guest bedroom downstairs to the dining room which has been converted into a puppy play pen.  They are enjoying their larger space which includes lots of toys that are rotated regularly, a sleeping area and the potty boxes.  I'm quite pleased with how quickly they have taken to consistently using the potty box to eliminate.  It makes clean up so much easier and helps to establish clean bathroom habits from the start. 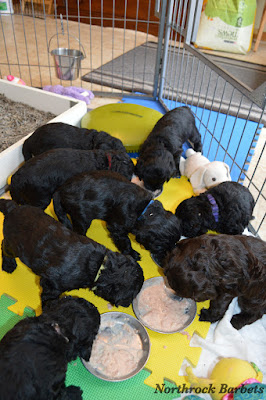 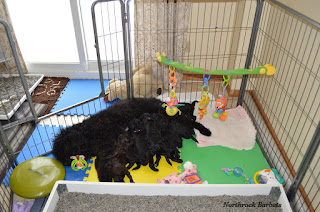 The puppies are now eating solid food 4 times a day.  It's a mixture of ground turkey with bone and goats milk and today we have introduced ground beef with goats milk.  They very much enjoy their mealtimes however, they are still nursing throughout the day from their dam.

Lots of visitors have been coming over which is so very good for puppy socialization.  We are playing noise c.d.s for the puppies which also helps to acclimate them to the many sounds of the real world in addition to the sounds inside our home such as pots and pans clanging and the vacuum cleaner running. The puppies are also having a grand time playing with their adventure box and exploring the space outside of their pen.

The puppies enjoying their adventure box 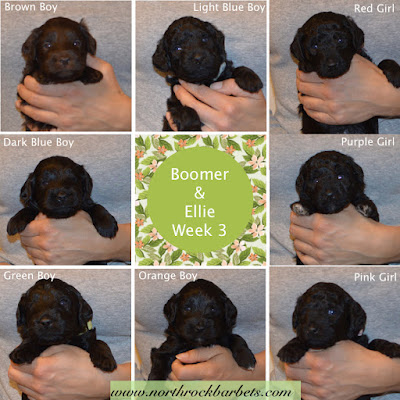 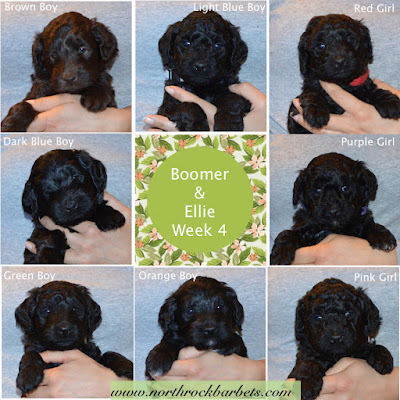 I hope you enjoy our blog posts about the Boomer and Ellie puppies.  If you would like to see more photos and videos of the pups I invite you to like our Facebook page Northrock Barbets where I try to post photos of the little ones on a daily basis.
Posted by Northrock at 6:06 AM No comments: 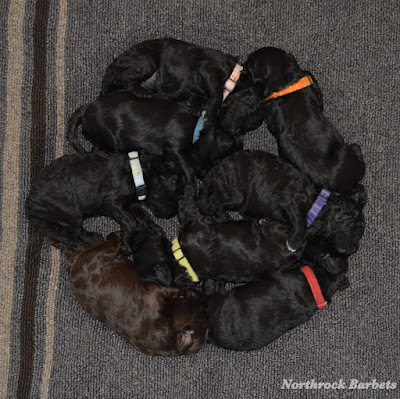 Well here we are mid-way into the puppies third week of life.  They turned two weeks old on Monday and everyone is doing really well.  Ellie continues doing a great job mothering her puppies.  She is keeping the whelping box very clean and is incredibly patient with her little puppies. 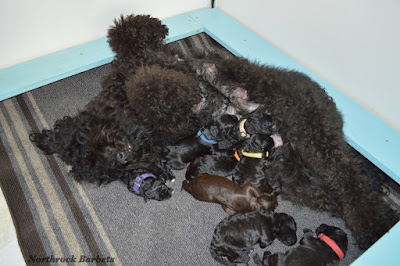 Ellie is brushed regularly and is looking good and feeling great and I think she enjoys the added attention.  She has quite the appetite and is eating several meals throughout the day including a midnight meal and a very early breakfast.


The puppies are growing steadily and all of them have opened their eyes.  They are beginning to really get up on their legs to move around the box and it's surprising how quickly they can motor about.  We have continued with the Early Neurological Stimulation exercises and the Early Scent Introduction.  Some of the scents that we have introduced the puppies to so far include lavender, orange peel, rose, cedar, cloves, leather, mint and soap.  Sometimes we don't observe much of a reaction in the puppies at all but at other times their little nostrils flare and you can really see them taking it in.  The leather was particularly intriguing to most of the puppies and so was the orange. 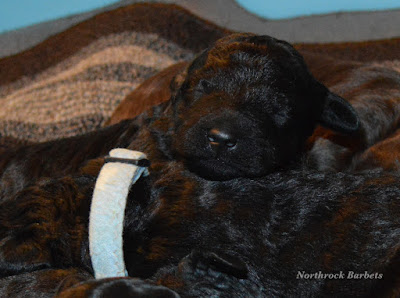 The puppies are starting to take up more room in the whelping box and it's beginning to get a little crowded at the milk bar.  There is quite a bit of jostling around as they settle in to a spot - it's all such valuable stimulation for their little senses.   Every day we snuggle and weigh the puppies and their nails are trimmed every three days so they won't scratch Ellie.


Posted by Northrock at 5:07 AM No comments: