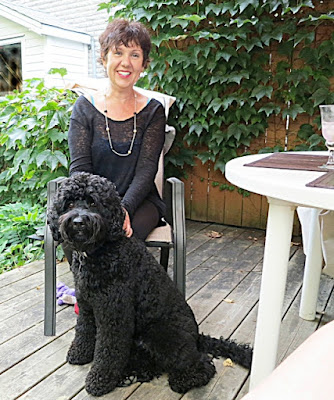 I first met April Esteves a few years ago.  She has since become the owner of Baxter, one of the Mona x Obie puppies.  She's a wonderful person and gives her Barbet a great life. April has written this article that I am happy to share on the blog.

A short while ago, I joined the growing number of dog owners found in Toronto. It had been some time since my last dog and it was like a new world had emerged for pet owners. After doing my research and finding the breed that best suited my lifestyle and family, I contacted the breeder and was sent a questionnaire to see if I was the right fit to adopt one of their puppies. After bringing my little guy home, I was suddenly immersed in house training, chewing, crating, obedience and socialization classes as well as learning about the latest attributes of raw feeding. I was arranging play-dates with my puppy and his new found friends and when possible was also bringing him along when I went to visit, rather than leaving him home alone. It was a completely different mindset amongst fellow owners of furkids, and the world of consumerism was happy to oblige.

According to Stats Canada, 50% of us live with pets and some 38% of them are dogs. A whopping upwards of 8 Billion dollars a year is spent on our furry friends including everything from veterinarian costs, food, training, grooming, and dog walking to doggie daycare.

Urban Toronto’s dog population is growing by leaps and bounds with many households having pets taking over the place of children in pre and post child rearing stages.  Gen “Y”’s look at having a dog as training before the kids come and Boomers are filling the gap once their kids have left the nest.

Pets are now being considered part of the family on a more equal note and more than half of the owners like to refer to themselves as Mommy and Daddy with them. With the changed attitude towards their pets, owners are also investing in dog-walkers and doggie-daycare for when they can’t be with them.  A greater number of people are working from home, which has eased the responsibility and walking their dog has become more of a social event. Since the beginning stages of puppyhood is so important with both training and socialization, some are taking their vacation around the beginning months and calling it tongue-in-cheek “Mat Leave” and even sending announcements of their new addition.

More hotels have become dog friendly for vacationing pet families and it’s also become more common for doggies to visit boarding facilities where they not only play together, but the owners can monitor their pup on a web-cam. North American courts have actually seen a rising trend with divorcing couples also sharing custody of their pets. These bundles of fur hold an important role within their families.

Many of the older homes in Toronto have gone through extensive renovations and rebuilding.  Designers are considering the needs of these furkids and have implemented clever ideas that flow with their vision and allow for doggy-friendly spaces. Mudrooms for wet paws, water resistant flooring, doggy doors to outside, canine showers and tubs, built-in feeding stations and matching dog bedding and pillows are adding both functionality as well as visual continuity to these redone homes.

Toronto’s Condo boom continues as well as an increasing dog population moving into them. It was never foreseen, that such a large number of condo residents would include having a dog. City Councillors and Planners are hoping to introduce new bylaws that would include amenities for dogs as a requirement and not an option. That could include for providing pet spa areas for cleaning dog paws and keeping the hallways clean as well as rooftop and indoor dog runs. In the past decade, we’ve seen an increase rising to 57% of the new homes being sold in the Toronto area being condominiums. Affordability is the greatest factor and the number of dogs included with these households, was not foreseen before.
Another important factor that Condo Buyers with dogs are taking into consideration is the proximity to any green spaces. Exercise is important to the dog’s life as well as the necessity for them having an area to do their business. Being close to a park is usually more important to someone living in a condo, since there’s no backyard for pooch to visit. The increase in Toronto’s off-leash areas in parks can certainly be attributed to the rising number of dogs and responsible dog-owners that are catering to their furkids. Both dogs and kids are sharing the parks in and around Toronto’s urban centres.

In addition to neighbourhoods being a deciding factor when choosing where to live, now with their dogs in mind, the closeness to parks and trails is another element to consider. Many of Toronto's communities offer the best of these worlds, with great shopping, fab eateries, closeness to subway access as well as areas that offer ideal outdoor spaces for pooches to enjoy.

A number of Toronto Condos and Lofts are already top of mind for those with dogs. CityPlace, which is downtown near the waterfront, offers bathing areas and dog runs without having to leave the property, as well as being steps from the waterfront trails.
Liberty Village has a number of dog park areas and green space that service the surrounding buildings and is super dog friendly.
Candy Factory Lofts, one of the more popular true hard-lofts in west-downtown Toronto, is walking distance from Trinity Bellwoods Park. It’s a massive multi-use park with an off-leash area known as The Dog Bowl. Abbey Lofts in the High Park & Roncesvalles area, is a converted 19th century church that is minutes to High Park. There you will find both off and on leash areas along with trails for exploring. Another popular choice is the Martin Goodman Trails that run along the waterfront and a little further west is the Humber Bay Parklands that also offer off leash areas as well as winding trails and paths that create a dog owners outdoor paradise in the City.
Urbanites looking for the perfect neighbourhood are now also factoring into the mix how their pooch will add to their own enjoyment of socializing and how they’re able to include them into their daily routine.  It’s now quite common to see outdoor patios filled with dog owners sipping their cappuccinos while Fido patiently lay and waits. Strolling along your favourite neighbourhood street is always more fun with a companion by your side that also happens to have four legs, and attracts more attention than you ever imagined.

If you already have or plan on getting a dog, it’s important that you confirm with any Condominium you might be considering, that in fact having a dog is allowed. Rules can differ in buildings as to having a dog, size, breed and number of pets. You don’t want to be disappointed after the fact.  Unfortunately, some of the older buildings still have a “no dog“ rule.

So, as I embraced adding Baxter to my family, I was able to experience first-hand the joy of having a dog again. I found that even during our daily walks, in addition to getting extra exercise for myself, I was also finding the people I encountered friendlier. Being around a furkid, really does make you smile.

I've included a list of my favourite neighbourhood parks in west-end Toronto that are part of communities that share green parklands with our furry friends. They are perfect for all pet owners to enjoy and especially for those living in Condo spaces where finding a nearby park is even more important.

Posted by Northrock at 5:18 PM No comments: